On 17 October 2017, an excited group of Langley Grammar students departed on a journey to Paris, one of the most beautiful cities in Europe. The visit was intended to help students learn about what Paris was like while putting their language skills to the test.

The Eurostar, which we took from St. Pancras all the way to Gare du Nord, was incredibly fast, hitting speeds of up to 300km/h!  Soon, we would be in the heart of Paris, a city we were very much looking forward to visiting.  After arriving, we took the metro to the youth hostel, where we would be staying for the next five eventful days.

As soon as we arrived at the hostel we dropped our bags at reception and sped off to the imminent boat trip on the Seine, boarding adjacent to the Eiffel Tower. The tower was a magnificent sight.  The boat trip was very comfortable and from the river we saw so many famous landmarks including Notre Dame and Pont Neuf which means ‘new bridge’ but ironically is the oldest bridge in Paris!  Once the boat cruise was over we went back to the hostel needing a good night’s rest. 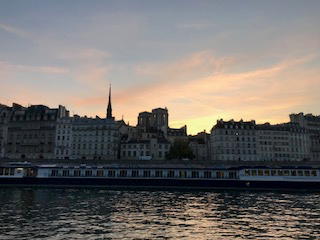 The following day we went for the first of two language lessons located in the heart of Paris.  We were split into groups depending on our knowledge and went away to learn some much needed French vocabulary. Once this was over, we headed over to the shopping centre called ‘Les Halles’ by foot where we purchased our lunch which was delicieux!  We all met up and headed onwards to the Montparnasse Tower, where from the top we had a clear view of the Eiffel Tower and Champs de Mars.

The following day began with our second language lesson, again with a native speaker. I think it is safe to say that we all learnt something valuable from the lessons.  We then went to Sacré Coeur, which is a beautiful Basilica in the heart of Paris.  Here we had lunch and then headed onwards to the Galeries Lafayette where everyone had an opportunity to do their shopping.  Finally, we walked along the Champs Elysées all the way to the Arc de Triomphe.  Again, there was an opportunity to buy gifts. This brought us to the end of another day where we had walked and walked. Despite needing a rest some students decided that they were in the mood to dance and enjoyed the disco back at the hostel that evening.  As a result, there were some tired faces the following morning! 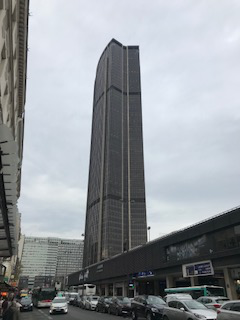 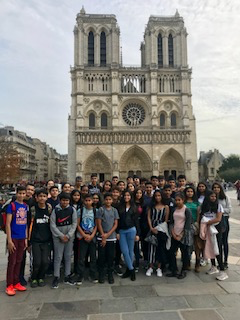 We woke the next morning, saddened that the trip was coming to a close. We first headed off on foot to the Museum of Les Invalides where Napoleon is buried.  We then returned to the hostel and packed our suitcases. We thanked all the hostel staff for the pleasant stay before heading back to the Gare du Nord to catch the Eurostar. We were exhausted but appreciated how great the trip had been.  France was saying its 'au revoirs' and we were saying our 'mercis'.  A particular thank you must go to Mrs Francis who organised the entire trip so efficiently and to Mr Broz, Miss Moriarty and Mrs Chowdhury who accompanied us.