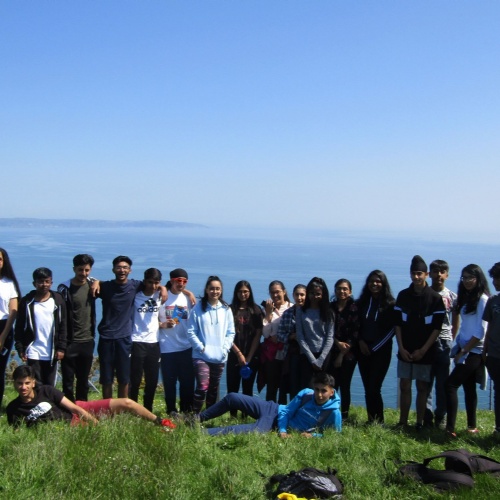 On the morning of Friday 19th May, the year 10 geographers left Langley to travel to the beautiful village of Slapton, Devon to undertake their GCSE geography fieldwork.

This article was written by Navin Vithana in 10R

The coach journey was long and enduring but helpfully filled with several stops at services to allow us to stretch our legs. Our first destination was at Haytor, an amazing granite tor located in the Dartmoor National Park, where we learned about the formation of the feature. Tors are found across Dartmoor. These exposures of granite that are roughly 20 metres tall and were formed by the weathering of granite, an igneous rock that had previously intruded into the sedimentary rock above it. As the granite cooled, it contracted so that cracks appeared across the rock. The tor is now protruding because several erosional processes have eroded the surrounding softer sedimentary rock over the years. 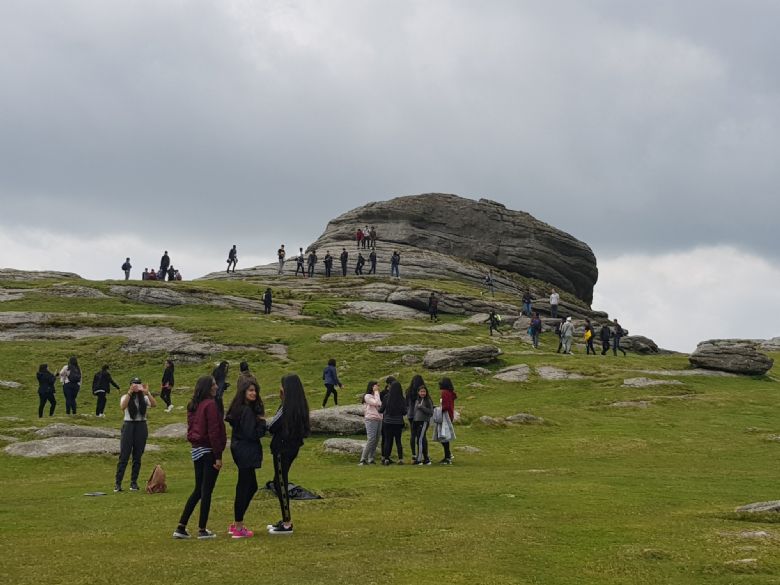 After much learning here, we took some final pictures of the great structure and departed for Slapton Ley Field Study Centre, where we would be staying. When we were arrived, we were all amazed by the natural beauty of the place. The sun was out and shining, the grass green and lush, and open areas to walk and hang around in; things that aren’t often seen back in Slough.

After a quick classroom session, we headed to Slapton Sands where we spent some time looking at the amazing view of the beach and learning about the physical processes affecting the landscape. All of us were in awe as we looked out over the water as the gleaming sun set behind us. A view to be truly appreciated. Before we knew it, the time had come to head home and enjoy some free time. Bedtime fell upon us and we had some much-needed sleep. 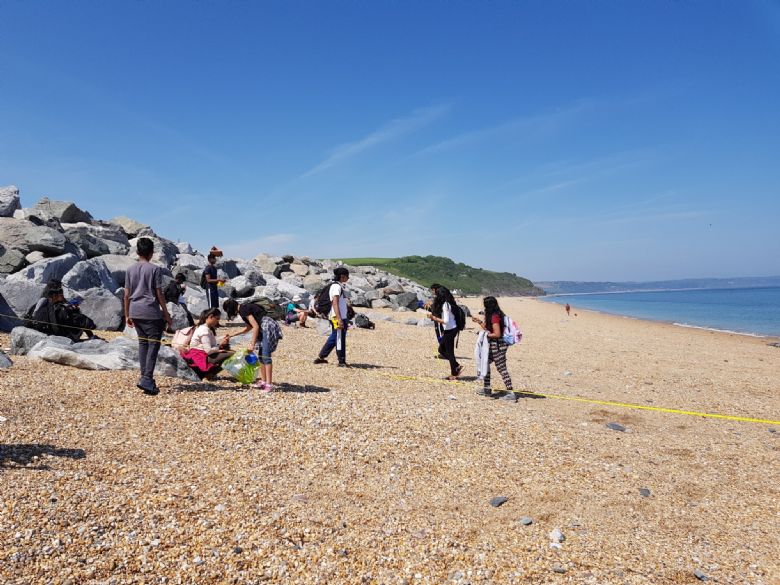 The next day, we had an early breakfast and filled ourselves with delicious food. We had another quick lesson where we were told what we would be doing for the day. We then took a coach ride to Start Point, roughly 8km away from where we were staying.

We then walked to Hallsands, a village which had partly fallen off the cliff after being attacked by severe storms in 1917. We spent some time learning about the history of the area and then continued our journey along the coast. We stopped at several settlements, namely, Beesands, Sunnydale and Torcross  where we headed back to the study centre. Throughout the day, we carried out several methods of collecting data to test the overall hypothesis that we had made: the benefits of coastal management will outweigh the costs in Start Bay. The methods we used were: cost-benefit analysis, bi-polar assessments, beach profiles, and flood risk surveys. After a very long and exhausting day, we finally reached the centre where we eagerly ate dinner to get some energy within us. We then had a lesson looking over the data and information that we had collected. Finally, it was free time again for us to all enjoy before we went to bed tired and exhausted.

The next day was focused on our rural fieldwork. Once again, we formed some hypotheses and set out on a coach to the village of Chillington. We walked through the village, noticing the tranquillity and peacefulness of the area, and carried out several methods to collect the data for our second overall hypothesis: a lack of accessibility links will decrease the rate of change in more remote villages. The methods we used were car number plate surveys, environmental quality surveys, land use mapping and change, functional change percentages, and quality of life surveys. After having finished collecting our data, we went back to Slapton and collected data there for comparison .  Therefore, we had two contrasting sets of data: Slapton, which was a more isolated area with less connections; and Chillington, which was a larger village that had a main connection to the A379 (a main road there). 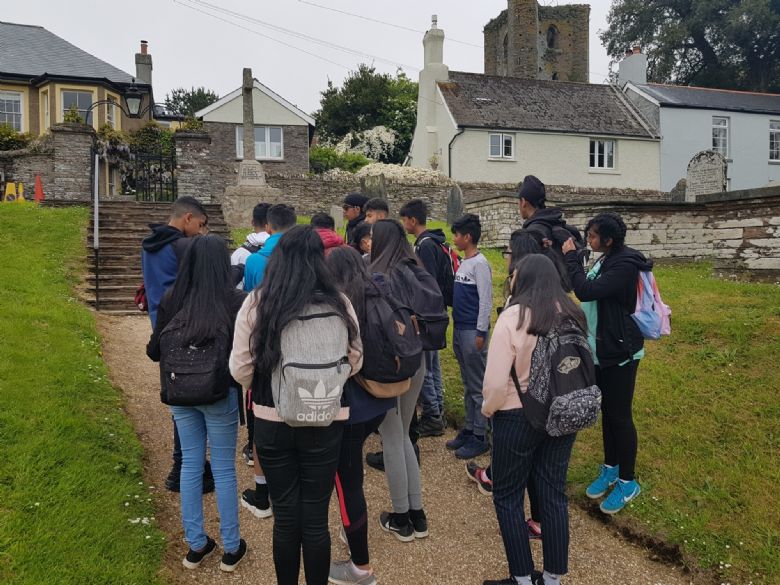 The final day had come, and we woke up early to pack our bags, eat our last breakfast of the trip, and sadly say goodbye to the rooms, which we had stayed in for the past three days. We had our final lesson where we discussed what individual research we would do for a hypothesis we created ourselves. We headed to our areas of choice and did our final fieldwork before heading back to the study centre ready to go home. We thanked our tutors for all the magnificent work they had done for us. We then left the study centre and sadly said goodbye.

All the year 10s thoroughly enjoyed the trip to Slapton and we all had such a great time. It was interesting to see what life is like in rural areas. We would like to thank Mr Mace, Mr Aplin, Mr Nelson, Mr Harding, Miss D’Authreau, Miss Du and Miss du Preez for making the amazing trip possible and helping us the whole way through. We would also like to thank the Slapton Ley Field Study Centre for supporting us and showing their great hospitality as well as all the tutors who accompanied and helped a great deal in the trip to give us this opportunity to learn so much about the area. 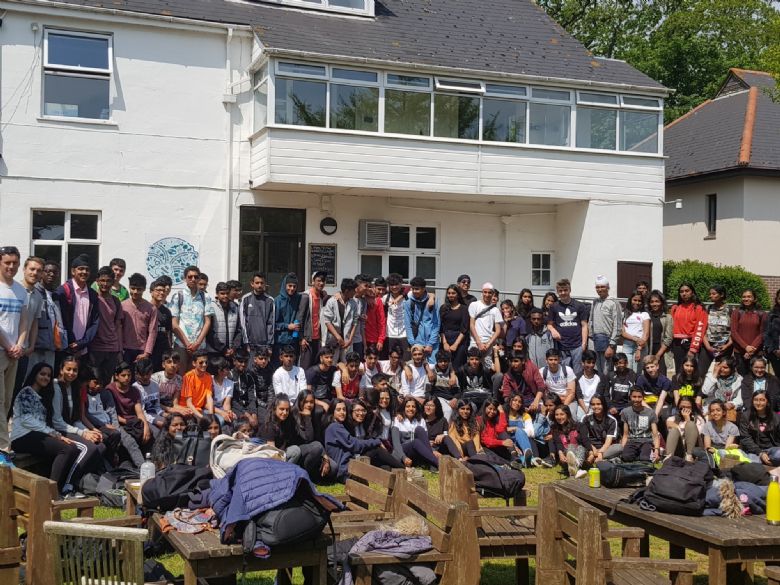