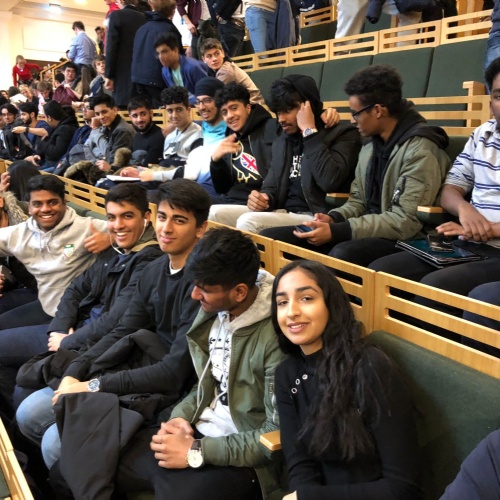 On Monday 26th November, the Year 13 Economics cohort had the opportunity to attend a day’s conference at Friends House, Bloomsbury. Some of the topics discussed involved UK productivity, the nationalisation of the NHS and the impact of Brexit on the UK economy.

This article was written by Amar and Sonia in year 13

Our first two lectures were delivered by two Labour MPs evaluating the importance of economics from their political perspectives. They were pro-Brexit and discussed the negatives of being part of the EU, involving issues with sovereignty and the ability of multinational operations to maintain their monopoly power. On the contrary, we received a talk later whereby another speaker discussed the implications of Brexit on our future generation such as the U.K. not being able to reap the benefits of a complete single market and keeping that competitive advantage.

A later talk explored the problems that our economy faces as a nation with a flat rate of productivity. As a service economy, it is notoriously harder to improve productivity in comparison to economies heavily weighted towards manufacturing and agriculture such as China. Therefore, we learnt that simply injecting money into the economy is ineffective and we must turn towards supply-side reforms or the outlook of the future is not looking good.

We also received a lecture regarding why we nationalised the NHS. In the past, it was seen as an unfair system where only the rich could afford healthcare which led to wider economic costs of an unhealthy workforce. This was an example of market failure whereby the state had to intervene in order to provide the service. The NHS is the biggest employer in Western Europe, paid for collectively through tax revenue and is based on need and not on ability to pay.

Overall, the day was highly insightful and was an incredible opportunity to hear economists and politicians discuss UK current affairs first hand. Their knowledge improved our ability to understand and apply economic theory to the world around us and will be useful application to use in our exams next year.