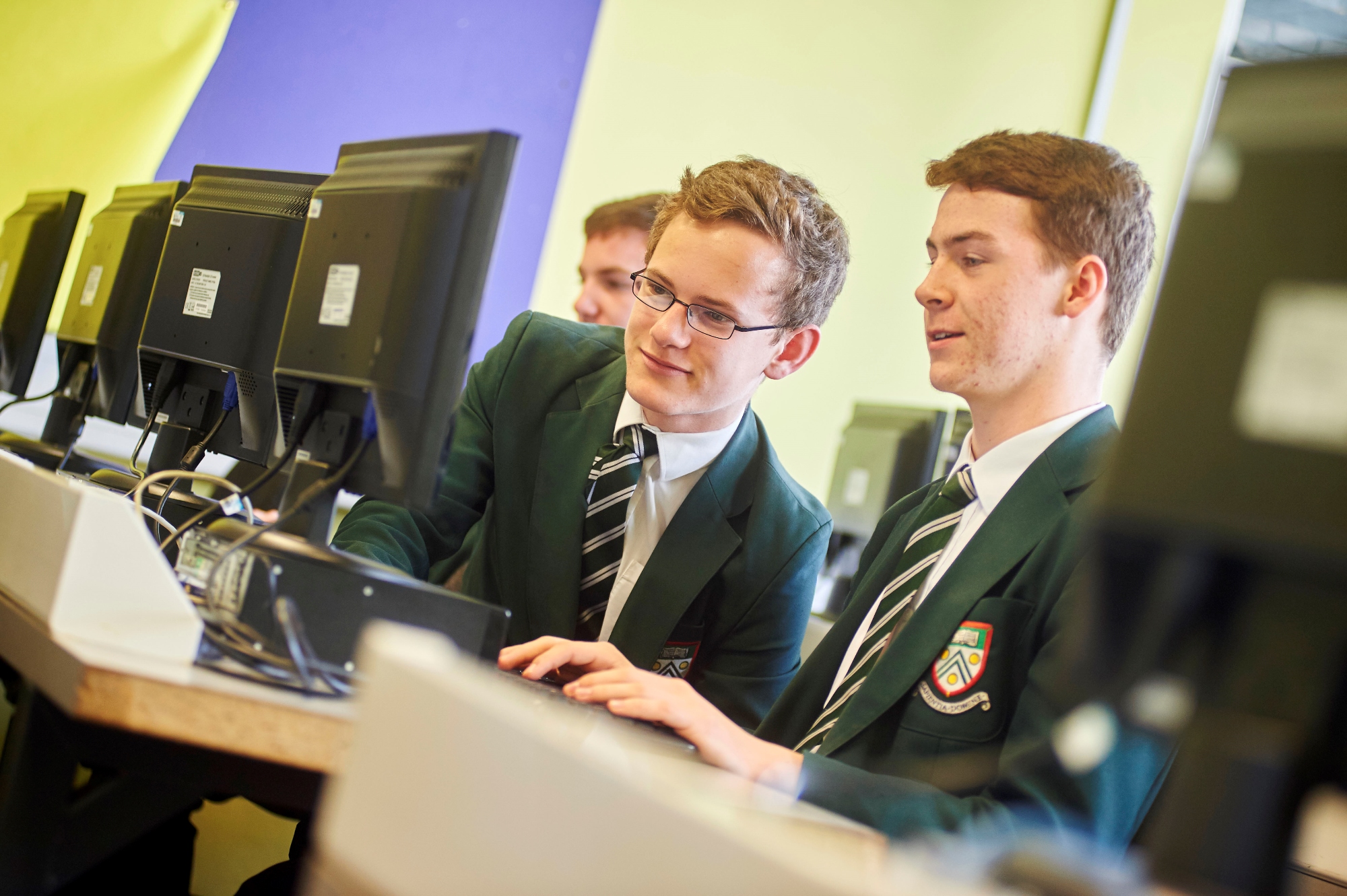 The 2020 GCSE examinations were cancelled due to the coronavirus pandemic.

Students in 2020 received GCSE grades which were the higher of their Centre Assessment Grade or the examination board's Calculated Grade for each subject. For an explanation of how these grades were awarded, please click here.

The grades awarded to Year 11 students through this process were as follows:

These outcomes will not be used by the Department for Education for accountability purposes and will not feature in the school performance tables.

Our Year 11 students sat 1700 GCSE examinations in May 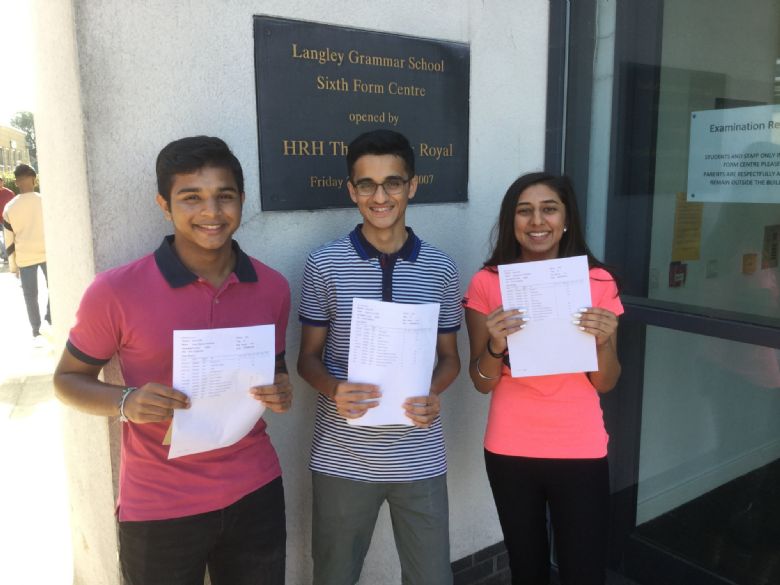 and June 2019, and were eagerly awaiting the outcomes on Results Day on 22 August.

Just under two thirds of the grades awarded were Grade 7 or above - a tremendous achievement reflecting the students' hard work and commitment throughout their courses, and the dedication and support of the staff.

Nearly 40% of the grades awarded were Grade 8 or 9, equivalent to A* or above on the old grading system. In some subjects the proportion of Grade 9s achieved was high, and we must make special mention of Chemistry where  38% of the students achieved the highest grade.

83 students gained Grades 7, 8 or 9 in 8 or more of their subjects, and over 70% gained five or more grades at these levels.

Langley Grammar School students have benefited from a broad and balanced education.  They maintained their studies of a wide range of subjects including music, art, drama and technology until the end of Year 9 before being required to choose GCSE options.  78% of the year group went on to gain qualifications in the Government's EBacc group of core academic subjects which comprises English, Maths, Sciences, a modern foreign language and either History or Geography, and uptake to other subjects such as drama, music and art was strong. 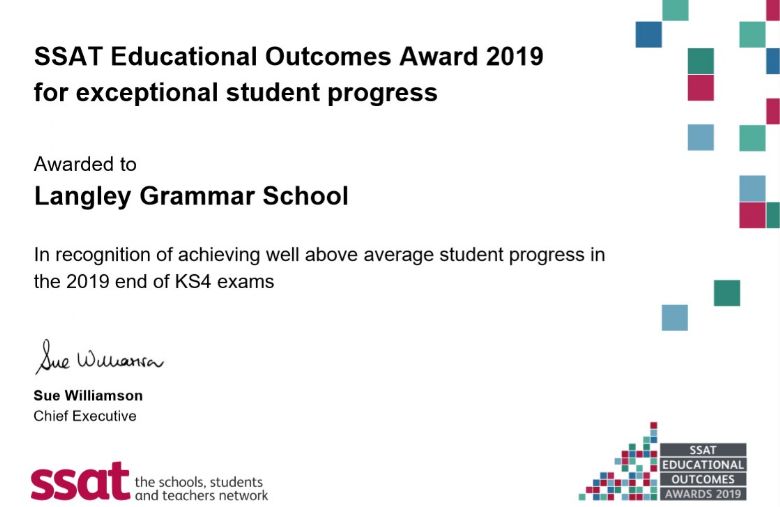 Langley Grammar School has been nationally recognised over the last four years for its exceptional performance by the national network SSAT. The annual educational Outcomes data analysis from SSAT has shown that the school has been consistently in the top 10% of schools nationally for the progress made by students during their GCSE courses.

Sue Williamson, Chief Executive of SSAT said:
“I am delighted that Langley Grammar School has won an Educational Outcomes Awards. This recognises one important aspect of the school’s work but at SSAT we believe an outstanding school has deep social justice at the heart of its plan; it subjects that plan to constant challenge and innovation; and it liberates teachers to perform brilliantly in the classroom. SSAT is pleased to recognise the quality of leadership and the hard work of all staff to ensure the success of every child. A big thank you and well done to students, parents, staff and governors.” ​

The Department for Education requires us to publish particular information regarding GCSE outcomes. T.

Progress 8 aims to capture the progress a pupil makes from the end of primary school to the end of secondary school. It is a type of value added measure, which means that pupils’ results are compared to the actual achievements of other pupils with the same prior attainment.

The score shows how much progress pupils made between the end of Key Stage 2 (Year 6) and the end of Year 11, compared to pupils in England who got similar results in the Key Stage 2 SATs assessments.

The Progress 8 score is based on up to 8 qualifications, which include English, maths, 3 'English Baccalaureate' qualifications including sciences, computer science, history, geography and languages, and 3 other additional approved qualifications. Maths and English are also double weighted compared to other subjects.

The average Progress 8 score for 'mainstream' schools in England is zero. Mainstream schools are schools that aren’t special schools or 'alternative provision settings' (for example pupil referral units). A score above zero means pupils made more progress, on average, than pupils across England who got similar results at the end of Key Stage 2.

Schools get a score based on how well pupils have performed in up to 8 qualifications, which include English, maths, 3 'English Baccalaureate' qualifications including sciences, computer science, history, geography and languages, and 3 other additional approved qualifications. Maths and English are also double weighted compared to other subjects.

To calculate the Attainment 8 score, each student's qualifying grades are converted to points and added up, with Maths and English double-weighted. The points values are given in the table below. Since 2017, reformed GCSEs have been graded on a 9-1 scale with each grade counting for the same number of points;  the points values of the old unreformed A*-G grades changed from year to year as shown in the table.

From the 2019 examination season onwards, all GCSEs have been graded on the 9-1 scale.

Until 2017, achieving GCSE grades A*- C in English and Mathematics was widely recognised as the minimum required to commence post-16 study such as A levels or vocational qualifications. Schools have also been ranked in performance tables by this ‘Basics’ measure.

From 2017, Grade 4 in the reformed GCSE examinations is regarded as a 'standard pass' and represents the minimum entry requirement for further education.

For selective schools like Langley Grammar School this figure ought to be very high; however, there will sometimes be a very small number of students in Year 11 who do not perform to this level due to illness or personal circumstances.

Grades 5 and above are regarded as 'strong passes'.

In 2017 schools are reporting the proportion of students gaining grade 4+ in English and Maths, and the proportion gaining Grade 5+ in those subjects. It is increasingly anticipated that Grade 5 will become the new 'expected' standard.

The English Baccalaureate (‘E-Bacc’) is a school performance measure used by the Department for Education. It measures the proportion of students in Year 11 who gain GCSE grades A*-C in the following subjects:

At Langley Grammar School students currently take GCSE courses in English, maths and three separate sciences as the core curriculum in Years 10 and 11. Although all Year 10 students are currently required to choose a modern foreign language, they may choose their remaining three options freely from a list which includes geography and history. Students are therefore currently not required by the school to study the full range of EBacc subjects although 80% or more choose to do so. The recent figures for the proportion of students achieving the EBacc essentially means that around three quarters of our students routinely choose to study History or Geography. This is in line with the Government's ambition for 75% of students to study an EBacc curriculum by 2022.

In 2015, the school's official EBacc figure was 1%.  In this particular year, almost all students sat examinations in the three separate sciences - GCSE Biology, Chemistry and Physics. They achieved excellent results, averaging 75-80% A*/A grades across the three subjects. However, because these students had also taken GCSE Core Science in Year 10, they were deemed by the DfE to be on the Science + Additional Science pathway. None of their separate science results were therefore counted in the EBacc measure, despite most students having actually having four science qualifications. This clearly nonsensical situation arose as a result of the DfE changing the rules about what would count in the EBacc measure after the school had committed to entering the students for the Science examination.

Note 6 - Proportion of students continuing in education or training

This measures the number of students who either stayed in education or went into employment after Year 11. The data currently published on the DfE website is for students who finished Year 11 in 2017, which is the most recent data currently available.