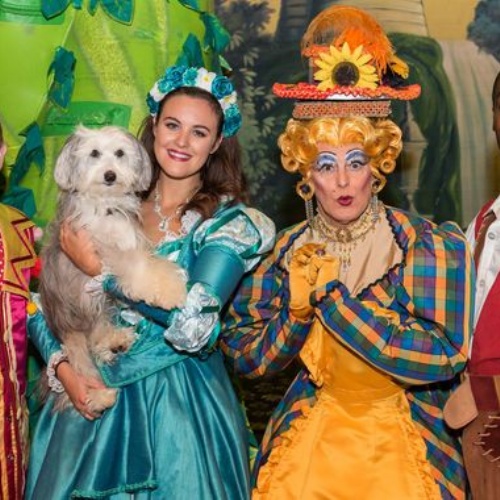 On Wednesday 13th December 2017, Year 7 went to a Pantomime trip at the Wycombe Swan Theatre in High Wycombe. This being our first trip at LGS, everyone buzzed with excitement on the day.

This article was written by Sumedha Devarakonda of 7R.

The theatre was a perfect setting for the show. Luckily, we were sat where we could see everything that was happening on stage clearly. We settled down and watched the Pantomime.

The show started with Spirit, the helper to humans and Creep, the helper to the Giant arguing, showing off and betting about who would win: Jack or the Giant. Then the main show started by introducing the characters. The protagonist of the show, Jack was played by Simon Webbe. The other stars were: Ashleigh Butler (Princess Apricot), Chris Jarvis (Simple Simon) and Nigel Ellacott (the mum of Jack and Simon also known as Dame Trot).

It was quite entertaining to see some of the latest pop songs mixed and matched with the Pantomime’s own music. There were some dramatic, romantic and sorrowful scenes. Moving on, Dame Trot would always keep up with the latest dressing styles throughout the Pantomime even under pressure! She (he) probably changed her dress at least 10 times! Later on, when they were encountering the Giant’s home we had an awesome 3-D experience! It was thrilling as well as scary at the same time. We would always cheer on the good character and “boo” the villainous character. The show ended with the Pantomime’s own version of ‘The Twelve Days of Christmas’ song which everyone felt was a perfect ending in the festive season. It was lovely to watch this Pantomime and Year 7 would like to thank Mrs Andrijiasevic and the Theatre Studies staff for organising this wonderful event.