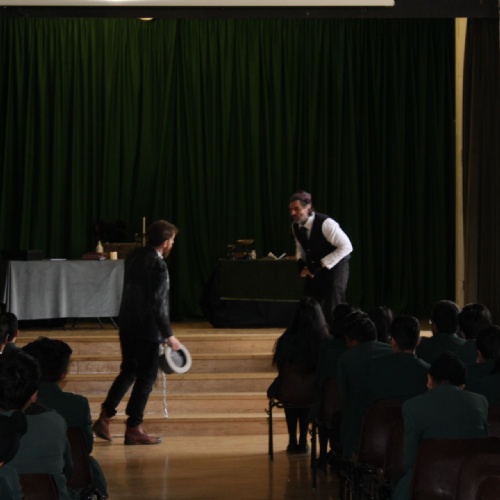 On Thursday 8th March, a Theatre Company known as Drama Impact came to the school to perform, ‘An Inspector Calls’ and, ‘A Christmas Carol’, as well run workshops with us. This was primarily to help us gain an understanding of the pieces for our English GCSEs, but throughout the day we were able to learn a range of skills in Drama too.

This article was written by Rushil Shah in 10H

To begin with, the performers spoke to us about An Inspector Calls, and how tension is built throughout the play. Then, they got a few volunteers to perform the opening scene of the play, and in this taught us about various techniques that were used. For example, they showed us the impact of the different ways of looking at something, and the impact this can have on the audience. After this, they showed us their perspective of the play, which was very well performed and realistic. It helped us to pick out some things we may have not been able to notice through simply reading the book. After this, they got us to ask some questions to the characters through ‘hot-seating’, so we could really delve into the characters’ views.

Next, the performers did their interpretation of  ‘A Christmas Carol’, which was their second performance. Not only did we learn about the different ways things could be presented in a performance, but we also learnt about dramatic techniques and the effect they had on us as the audience. After this well-acted out piece, a range of volunteers performed a few scenes. These were some pieces that were made taking ideas from the novel and it allowed us to see how creative we could be using a book, and how effective it was to bring it to life.

Finally, to end the day, each form created their own piece of a scene from either of the 2 plays, or their own imagined scene from the play. This was very effective as it allowed us to demonstrate our learning from the day. We would like to thank Drama Impact and Mr Gardner for organising the event for us.