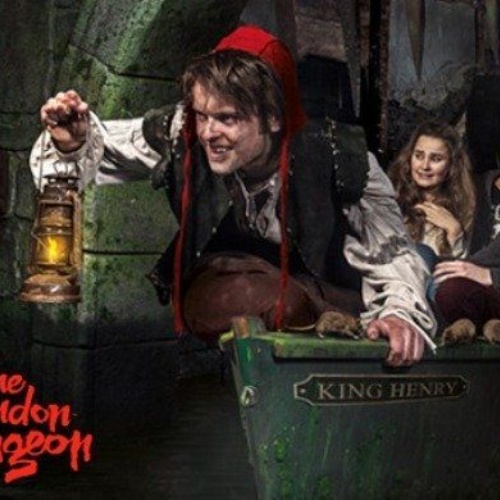 On Tuesday 30th October, Year 8 visited the London Dungeons to celebrate the Halloween Screamfest! The students have been studying gothic fiction in their English lessons and so the venue offered plenty of inspiration on the subject.

This article was written by Kiran in Year 8.

As part of our Gothic Literature topic, we went to the London Dungeons. Upon arriving there, we met the King’s jester, who regarded us as traitors of the king! We were on our journey to our execution. During the journey, we would learn about how life was like from the 1500s to the 1800s!

We boarded the Tyrant Boat Ride, where we made our way to the Tower of London in the dark. It was 1536, and we were sentenced to death for conspiring with Anne Boleyn. Throughout the ride, we encountered many bodies of traitors and some splashes too! Fast forward to 1605, we were at the Torture Chamber. The enthusiastic torturer had captured our teachers to demonstrate some of the torture devices! We learnt about instruments such as the Pear of Anguish and the Rack, which were used on Guy Fawkes.

Next, we arrived at Mitre Square in 1888. The grisly details of Jack the Ripper’s murders were given to us, as we saw his latest victim. Suddenly we had to go through a mirror maze, only to arrive at the Ten Bells Pub, where the notorious Ripper’s victims once drank. The landlady told us more about the serial killer and things got more tense when the light turned out. Within flickers of light, we could see Jack the Ripper threatening to stab us. Terrified, we moved on to the next show.

We met the Newgate Prisoner, who would not respond to any of our provoking. We experienced a show that thrills us and fills us with unease! Finally, we arrived at the Newgate Gallows, the area of our execution. After going on the Drop Dead ride, we would finally be executed! What a great way to end our London Dungeons Journey!

Overall we had a splendid time; we were thrilled as much as we were amused. Year 8 would like to say a big thank you to the English department and all the teachers who came along with us.