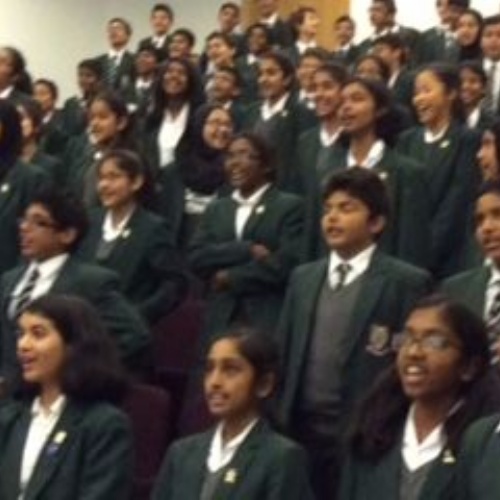 Our year 7 students recently took part in our annual concert. The event was great fun, with each tutor group performing a piece in front of the whole year group. Students and staff also enjoyed listening to performances from our Junior Orchestra

On Wednesday 19th October, the whole of year 7 met in the lecture theatre to perform in their annual singing concert.  This is where every class in year 7 learns a song of their own choice, and performs it in front of the whole year.   The music concert was a spectacular and engaging concert.  At first, our Junior Orchestra played a piece called ‘Symphony No.9’ with Mrs Wharton conducting.  This showed us how much fun playing an instrument could be, and showed us all of the opportunities available at Langley Grammar School.  After the Junior Orchestra played, Mr Wilkinson showed us a video about the research of playing music, and that you can develop multiple skills from playing a musical instrument, such as teamwork, creativity, confidence and memory skills.  Next, our A Level group, Flexemble, played to show us how much you can improve from the start to the end of Langley Grammar School.  Before we all performed, Mr Wilkinson lead us through a warm we do every single lesson to warm up our voice and body muscles.  First to perform were 7S, and I have to say, this was the most enjoyable performance of ‘Pretty Hurts’ by Sia I have ever seen or been involved in!  Everyone enjoyed it and started clapping along.  Up next were the other forms who sang a big group piece called ‘Sweet Dreams’ by the Eurythmics.  After we had all performed as separate classes, we sang ‘Oh When the Saints Medley’ as a whole year group, which was so loud it almost brought the celling down! There was a competition afterwards to see which form was the best at singing!   This concert was a really good experience, as it opened our eyes to singing, to learning new instruments and showed the many career paths learning music can lead to.