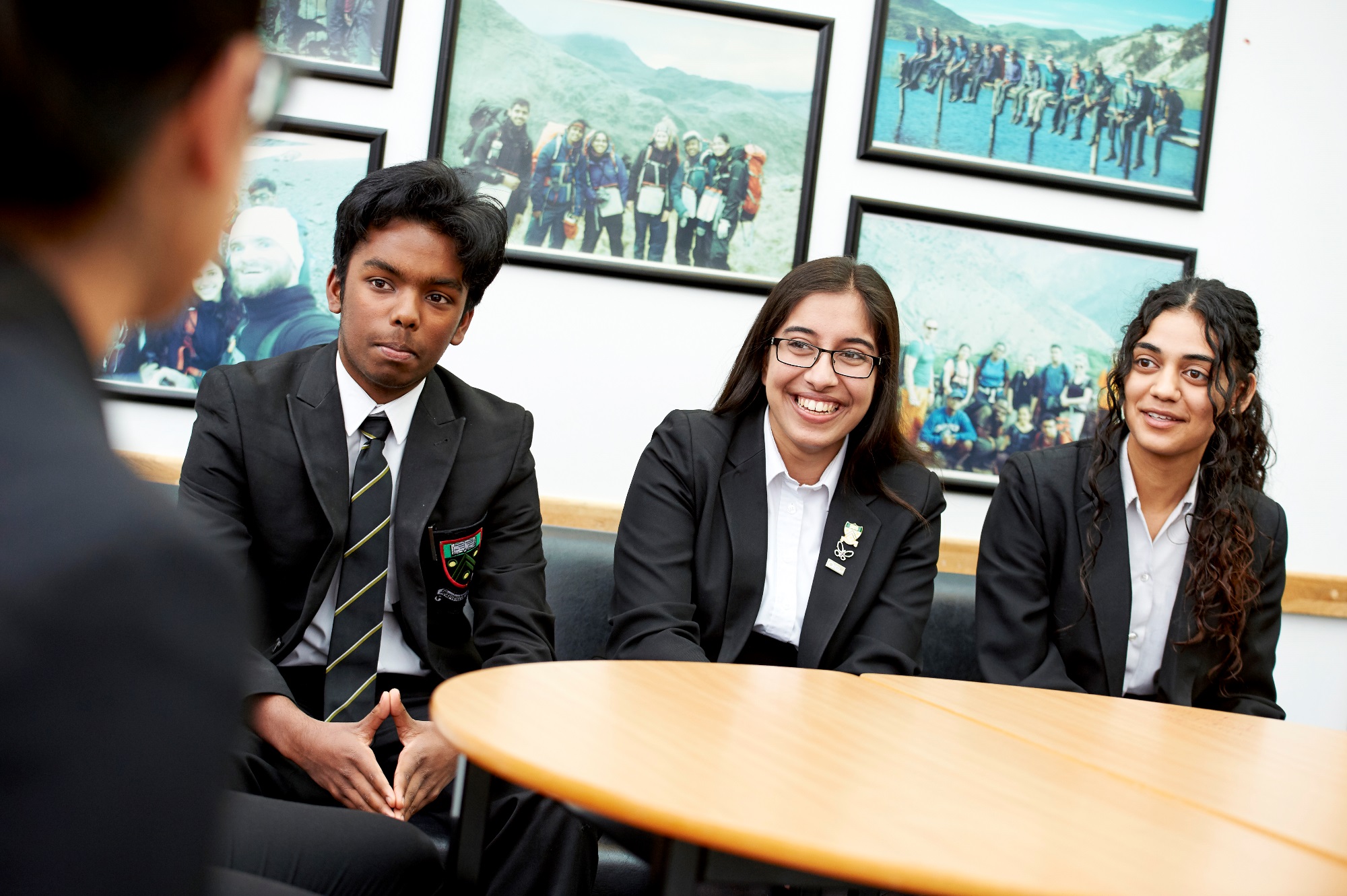 Clare has been a Community Governor for over 15 years.

Clare serves on the Teaching and Learning Committee, the Student, Staff and Community Committee and is the named governor for Safeguarding and SEN.

A former student of the school, Clare has longstanding local interests, working in community health services (NHS) in Berkshire, specialising in working with the under 20 year olds, and as a magistrate on the Berkshire bench and is a member of the youth panel.

Sarah is a Community Governor at Langley Grammar School. She has served since January 2000 first as a Parent Governor, and chaired the Personnel Committee prior to the formation of the Student, Staff and Community Committee in December 2015. She has a degree in Modern European Studies (Economics, Politics and Languages).

Sarah is External Affairs Director at Dufry, an international business and significant employer in the Heathrow area. She is responsible for stakeholder relations and maintains close links with Governments and regulators to protect and enhance business growth opportunities. Sarah is also President of the European Travel Retail Confederation (ETRC), Chair of UK Travel Retail Forum, a board member of the Duty Free World Council, founder member and Chair of Women in Travel Retail, which offers career guidance and networking opportunities to women in the travel retail industry, and Chair of Lotus Flower Trust, a charity which builds schools and homes for disadvantaged children in remote villages in India. Sarah is a member of the Strategic Advisory Board of Loughborough University's School of Business and Economics.

As Headteacher of Langley Grammar School, John is an ex-officio Governor.

Raised in East Anglia, John attended the town grammar school and was the first in his family to go onto higher education. He graduated from Durham University with a degree in Engineering Science and Management, and had a brief spell as an engineer with Unilever before deciding to retrain as a physics teacher. His subsequent career has been in a series of selective and partly-selective schools in Buckinghamshire and Hertfordshire before taking up the headship at Langley Grammar School in 2010.

John is a National Leader of Education, Ofsted Inspector, Chair of Slough Schools Forum and is involved in collaborative work with other schools for the benefit of the local area.

Claire is a community Governor appointed in March 2015 and is Chair of the Student, Staff & Community Committee. Claire was appointed Vice Chair of Governors effective September 2018.

Claire, a former pupil of the school, was born in Langley and until recently was a long term resident. She studied law at Durham University and qualified as a solicitor with a very well established firm of local Solicitors where 30 years later she is now the senior partner.

Claire specialises in Children work especially where Social Services are involved and is a member of the Law Society’s Child Panel. She is also a Resolutions (a family solicitor’s organisation) accredited specialist in Domestic Abuse & Children Law. She is Chair of the Berks & Bucks Regional committee of Resolutions and a member of its Domestic Abuse National Committee. Claire actively supports & helps to fund raise for a local charity DASH (formerly East Berkshire Women’s Aid).

In her spare time Claire loves to take her dog on long walks & hopes to learn golf.

Monique is an MFL teacher specialising in French. She has taught at LGS since September 2007,  was elected as a Staff Governor in April 2013 and is a member of the Student, Staff & Community Committee. Monique is currently serving as a co-opted governor following the end of her staff governor term of office.

Apart from teaching commitments as part of the Modern Languages team, Monique is also a Pedagogy Leader. As such, she is part of a team responsible for training other teachers on a continuous development programme. She frequently organises and runs visits abroad for students to allow them to practice languages in their country of origin.

Prior to teaching, Monique worked for 16 years at Hasbro, one of the largest toy manufacturers in the world, as copywriter and graphic designer. She also chaired the Daisy Network, a small charity that deals with women’s health problems, successfully leading the group to becoming a registered charity.

She is a native of Brazil and also holds French citizenship.

Roma joined the Governing Board in December 2011 as a Parent Governor and served as Chair of Governors from October 2015 until August 2018.  Roma then served as a Co-opted Governor following the end of her parent governor term of office.  She has been a member of the Pay and Resources & Audit and Student Staff and Community Committees.  Roma was appointed as a non-attending co-opted governor from August 2021 in order to continue as a Member of the Academy Trust.

When not in school or at work Roma is an active member of the charity Pets as Therapy and attends a local primary school as part of the READ2DOGS initiative. She and her PAT dog also provide Animal Assisted Therapy to stroke survivors in conjunction with an Occupational Therapist in the London area.

Vishakha was appointed Community Governor of Langley Grammar School in 2014. She is a former student, attending the school from 1997 - 2004. Vishakha then went on to study dentistry at the University of Birmingham and is currently working as a dentist with Berkshire Community Dental Service and Buckinghamshire Priority Dental Service.

As a former student, Vishakha has a particular attachment to the school and is eager to give back to the academic institution that gave her a great start in life. She has volunteered with various national and international organisations in the past, and in her role as Community Governor, she now has the opportunity to give back to her local community. Vishakha sits on the Student, Staff & Community and Teaching & Learning Committees and is the named governor for Careers.

A resident of Langley, Jack has been a governor for over 10 years, maintaining a particular interest in Admissions and Curriculum matters. Jack was elected Chair of Governors effective September 2018, prior to this Jack served as Chair of the Teaching and Learning Committee from 2013 and was Vice Chair of Governors from October 2015.

Jack read chemistry at Durham University, obtaining a PhD, and later gained further postgraduate qualifications in marketing. He is a Fellow of the Royal Society of Chemistry, a Chartered Chemist and a Chartered Marketer, and works in international marketing management for a FTSE 100 listed engineering company.

Jack attended grammar school himself; he represents the second of three family generations to have done so, his father passing the 11+ in 1938 and gaining a Council bursary to buy his school uniform! More recently his son attended Langley Grammar School, with Jack joining the Governing Body initially as a Parent Governor.

Anil was appointed as a Community Governor of Langley Grammar School in Dec 2020 and sits on the Resources & Audit committee.  He is a former LGS student, attending from 1990-96.  He went on to study Management Science at the University of Warwick and later for a Masters in Business Administration at INSEAD in France and Singapore.

Anil’s professional experience spans strategy, finance and technology.   He has spent over 10 years advising global executives and policymakers at McKinsey & Company and Bain & Company where he was a senior member of the financial services leadership team. Currently he works with Mastercard International as a leader in the strategy division.

Born and raised in Langley, Anil is passionate about the importance of social mobility and giving children the best possible chance to succeed through equal opportunity and elevated aspiration.   He is actively involved in the community as a speaker, coach and mentor.  He has three young children that study at a variety of local schools.

Kulwarn qualified as a Chartered Accountant with Price Waterhouse, one of the “Big Four” global accounting firms.  He became a Partner, handling some of their largest clients, before joining a boutique City based firm of accountants, Rawlinson & Hunter (“R&H”), as a Partner. R&H provides accounting, finance and taxation services to high & ultra-high net worth individuals/family groups and serial entrepreneurs, albeit Kulwarn continues to specialise in dealing with Corporate work.

He is a Fellow of The Institute of Chartered Accountants, with experience of both the public and private education sectors, from his own schooling (involving the UK and overseas) and that of his children. His children attended LGS before going to university and qualifying as a doctor and a chartered accountant.

Kulwarn was elected as Parent Governor in 2004 before being appointed as Community Governor in 2011. Committees he has been involved in include Resources & Audit (previously the Buildings and Finance committees) and Admissions.

He has been working as a senior Computer Science examiner with a leading exam board for the last 7 years. Daljeet is also a Computing “Master Teacher”, working with Computing at School and The Chartered Institute for IT, training and supporting secondary and primary school teachers. He also supports university students with their job searches and interview preparation as a professional mentor.

Other than his teaching and pastoral care commitments, Daljeet is also part of the management committee of a charity supporting senior citizens. He is interested in improving living conditions for individuals suffering from Dementia and loneliness.

Collette has a degree in Classics from King’s College, Cambridge and a Diploma in Library and Information Science from University College London.  She is a chartered Librarian.  She also networks with other school librarians and, until May 2020 was Treasurer for the Central and East Berkshire branch of the School Library Association.  She attends meetings with other Slough School Librarians to share expertise.  Unsurprisingly she reads widely and aims to pass this enthusiasm to Langley pupils. Extensive leisure reading has been shown to boost educational performance.

She is owned by a cat and enjoys cycling, gardening and crosswords.

Sid was elected Parent Governor in March 2019 and is a member of the Teaching and Learning Committee. He studied Electrical and Electronic Engineering at the University of Birmingham and went on to complete his Postgraduate in Electronics & IT.

From a career perspective, Sid has over 15 years of experience working with Financial organisations globally, helping them to plan and deliver their Strategic Programmes. He continues to provide consultancy services (both Business and Technical) to them in this regard.

Sid recognises the importance of Education for all ages and believes that there is always something new to learn and as such he enjoys understanding the science behind how things work.

Sid is a keen sports person with particular interests in Cricket and Cycling. He has taken part in several events, including Ride London, Tough Mudder and was fortunate enough to have played Cricket at Lords.

Seann is Director of Music at Langley Grammar School. He has taught at LGS since April 2013 and was elected as a Staff Governor in May 2020 and sits on the Teaching & Learning Committee.

Apart from leading a busy and vibrant music department, Seann is a ‘Pedagogy Leader’ responsible for developing staff competency in teaching with technology, and a qualified facilitator for the SSAT NPQML course.

Seann received his designation as a Specialist Leader in Education in June 2018, and is actively involved in delivering training and providing support to teachers and newly qualified teachers in local schools.

Seann frequently organises school visits and high profile concerts.  He supports students in their Duke of Edinburgh scheme, acts as a mentor to students on the Extended Project Qualification and is lead teacher responsible for the planning and delivery of the 6th Form world expeditions.

Outside his teaching commitments, Seann is currently studying for an NPQSL and MSc in Psychology, and enjoys directing for drama societies, singing in choirs and reading and travelling as much as he can.